How to Clean a Hopeless Iron.

Seems like an obvious statement, I know.  “Don’t iron stuff that will melt.”

So this happened tonight.  My iron tipped for a second at the most, as I was pressing a strap.  Unfortunately, it rested right smack on a thin plastic bag that melted instantaneously.  The plastic fused to the sole plate and was so thin and smooth it was NOT coming off.  I tried ironing waxed paper.  I tried gently scraping, I tried freezing and gently scraping, I tried Magic Erasers, and I tried dryer sheets by themselves.  Nothing budged this stuff.  It was one with the iron.

So here’s the trick – it’s a combo trick.

Turn your iron on the hottest setting.  Put some table salt on a sheet of waxed paper, and on a surface that you won’t damage with a hot iron, iron the salt on the waxed paper.  The salt will cling to the iron, the iron will smoke.  Immediately iron a couple of clean dryer sheets.  You’ll see the melted stuff come off on the dryer sheets.  Repeat until clean. 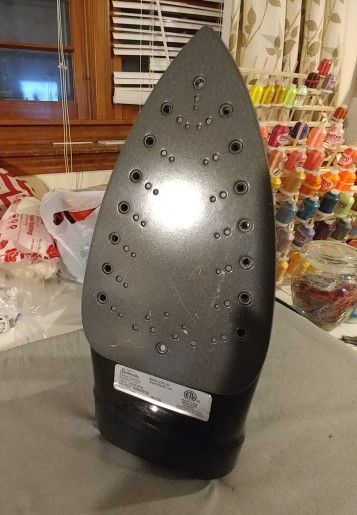